Master Sakai has sent you in search of The Water Warrior. Head out to Sancre Tor Village and ask around about the Water Warrior. Most Blades Guards will have the information you seek, even those claiming not to know the first time you ask.

You will be directed towards Gaia The Healer's house and Blademaster Jules Cullen who will task you with recovering her goods which were stolen by a group of bandits. The bandits make their camp somewhere along The Red Ring Road between Leyawiin and Cheydinhal. Their camp, Tower Shade Camp is clevery hid along the shore of Lake Rumare.

Hint: There is an Ayleid Well in the vacinity.

The bandit leader has the loot you are looking for. Once you've defeated the bandits and recovered the stolen goods head back to Blademaster Jules Cullen in Sancre Tor. She will reward you with The Water Warrior book. Read the book completely and head back to Master Sakai in the dojo for your test and your next assignment.

Master Sakai has sent you off on an assignment, to find The Water Warrior and he gives you a tidbit of information; to ask around. Follow through on his suggestion and start asking everyone you see in Sancre Tor Village about The Water Warrior. There will be many you ask that do not know, but keep asking around and eventually you will find someone with the answer.

Tip: Most light Blade Guards will have the information you seek, but might claim to not know about the particular Warrior you are seeking. Keep asking, their answers are random and the one you want will eventually come up. The Blades at the inner entrance in the Temple of Light are infamous for this and Mei Satomo is your best choice of repeatedly asking when she is on duty.

You will be directed to Blademaster Jules Cullen who is tending to a mortally wounded apprentice at Gaia The Healer's house located in Sancre Tor. When speaking with Blademaster Cullen she will send you in search of the bandits who stole her goods, The Water Warrior being among the items. Blademaster Cullen will loan her apprentices blade to you with the admonition to hurry along before the bandits can break camp. Collect any supplies you may need before leaving Sancre Tor.

This can be a challenging fight, one strategy is to draw the bandits' attention then retreat back to the road where more than one Legion patrol is routinely passing by. A Legion rider will usually join the fray and help you make quick work of the angry mob. Dispatch the bandits and the bandit leader making sure to recover Jules' Stolen Goods. Return to Blademaster Cullen at Gaia The Healer's house in Sancre Tor. Jules will recover her apprentice's blade and reward you with The Water Warrior. Read the book completely and head back to Master Sakai in the dojo for a test of what you learned from The Water Warrior. Once you complete the test to the satisfaction of Master Sakai he will allow you some time for rest before assigning you the next task. 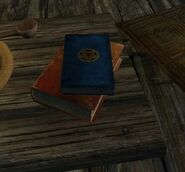 Page 19 & 20
Add a photo to this gallery
Retrieved from "https://reclaimingsancretor.fandom.com/wiki/The_Water_Warrior?oldid=7428"
Community content is available under CC-BY-SA unless otherwise noted.