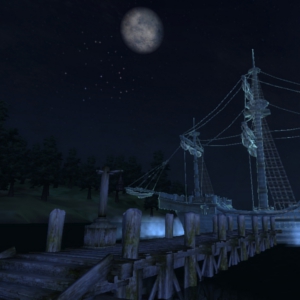 Location: The Cavern of SeeingEdit

The Oracle has been meditating and sees where the destination for the Earth Stone lies, but not how to arrive there from this realm. Visit Yume at the Archives in the Hall of Masters with the key The Oracle provides. From Yume’s information the quest will update with information on shipping trade between Tuatha Danan, the Isle of Half Light and Topal Bay, the next stop. Follow the ghostly lamp to the Black Flag’s Pier, the ship will arrive at midnight.

The Ghost Ship’s destination is Tuatha Danan and arrives conveniently in its port. Investigation of the town turns up ample clues as to whom and where the accursed can be found. Tuatha Danan, The Isle of Half Light is the home of the Earth Stone and of Cliff Spiders. Locate Queen Tarantella and through more wit than might dispatch her and release the Accursed Man. For detailed help in defeating Queen Tarantella see here.

Speak with the Accursed Man to gain the Earth Stone. Collect the stone and the burden it holds and return to The Oracle in the Cavern of Seeing.

Yume can be found in her room off to the left side and in the rear of the room, engage her in conversation after which she will then lead you into the library. Yume will find a book on a library shelf and read some passsages from it. Player controls will be disabled while she reads from the book. The quest will update with information about shipping trade between Topal Bay and Tuatha Danan, The Isle of Half Light. Take leave of Yume and prepare to travel to the south of Leyawiin. The Topal Bay Coast Guard Station is southeast of Leyawiin, on the opposite shore.

There is a lamp hanging on a post at the end of the pier, activate the lamp and turn around. The lamp has become a ghostly guide as predicted; follow it along the bank, across the bridge to an island and keep following the Lamplight across the water. It will eventually stop on a pier post on a little deserted island. The Black Flag, a ghost ship, arrives at midnight, if arriving after that time it will show the following midnight.

Board the ship when it arrives; the crew doesn’t have much to say and you’ll have to take the helm. Activate the ships wheel and it will take you to the harbor in the Isle of Half Light. Disembark and search the town, Canyon’s Maw is void of inhabitants and the evidence of great struggles everywhere. After leaving the ship turn left at the end of the pier, the first shack on the right has a basement in the rear and Edic who has information you could use is holed up there. Continuing the search is fairly easy, only certain buildings are accessible. Crossing over the high wooden suspension bridge between the sea gates you’ll find Captain Balor Hyde’s house on the right. You’ll find his remains, an Ancient Tablet and a Tattered Journal in the attic space accessible by a step ladder. Read the journal and the quest updates.

Back track through the village and head out through the large gate following the trail. Old Town, a ruined settlement can be found on the trail along the shoreline. Taking time to investigate the ruins a certain Beru and Owen Lars can be found in an attic with a bit more revealing information.

The trail will lead to the bridge, which as mentioned is out, so take the trail to the left of the bridge and down the hill to a passageway entrance. The Underpass is located just north of the waterfall base. Traversing the Underpass, the Welkynd Mine and more of the Underpass is straightforward and once emerging follow High Pass, a clearly defined trail and you’ll meet up with the first encounter of Cliff Spiders.

Continuing along High Pass will arrive at Malasel, a tomb, enter and finding an Ayleid switch on the wall in the back, depress it and head out. The High Gate at the bridge will now be unlocked, cross the bridge and follow the trail to the top. Jump down the large blocks to get to the road and head south. To the north is the ruined bridge. Follow the road up the mountain eventually arriving at the Earth Kingdom.

The Earth Kingdom is treacherous; there are gas traps, earthquakes and falling debris to be concerned about as well as the Cliff Spiders. Three more Ancient Tablets will be found while moving through the ruins which add to the drama and give added information to the story of the Earth Stones realm. All paths through the Earth Kingdom will eventually lead to the deepest chamber of the ruin, the home of Queen Tarentella. Again, with the previous boss battle, using wit to best Queen Tarentella is the strategy. For more detailed help in defeating Queen Tarentella read here.

Upon defeating the Queen enter the small room and activate the Accursed Man’s sarcophagus. After the conversation he will release the stone, pick it up and retrace the path back up and out from the belly of the earth. Watch for falling debris and blocked passages, the earthquakes intensify after the Queen is dead and the Stone released. The resident population of Cliff Spiders is none too happy either; they don’t want the stone to leave. The quest will update upon leaving the structure. Head down the mountain following the same path, the Black Flag will be waiting at the harbor for the return trip to Cyrodiil.

Tip: Cedic is a sullen old man and won’t come with you if you ask; don’t feel bad if you pass him by.

Activate the ship’s wheel as before, return to Cyrodiil and The Oracle at the Cavern of Seeing with the new stone and the curse it carries.

Lamplight at its destination

The Lars in Old Town

Leaving Malasel through the unlocked gate

The Accursed Reliquary
Add a photo to this gallery

Korbin and the 2nd Ancient Tablet

Retrieved from "https://reclaimingsancretor.fandom.com/wiki/The_Isle_of_Half-Light?oldid=7431"
Community content is available under CC-BY-SA unless otherwise noted.